Reach Records Announces the “We Are Unashamed” Tour and EP

Reach Records kicks off 2022 announcing pre-sales for We Are UNASHAMED TOUR which kicks off March 17th in Austin, TX and travels to 13 cities across Midwest, South, and Southeast regions ending April 10th in Orlando, FL. The tour, branded We Are UNASHAMED references Roman’s 1:16, “For I am not ashamed of the gospel, because it is the power of God that brings salvation to everyone who believes!” The verse developed from a mantra and into a movement for Reach Records, its artists and believers of the 116 Lifestyle.

“We really wanted to unite cultures with this EP and show the world that the Unashamed message is global and bigger than where we’re from,” shares Lecrae, artist, co-founder, and president of Reach Records. Lasanna “ACE” Harris, VP of A&R who produced “Otu Otu Isii” adds, “We get so much love and support from Africa, so on Otu Otu Isii we wanted to amplify that support, blend genres, and ultimately rally around the banner of proclaiming our faith to the world.”

“The abstract graphic of the eclipse on the We Are UNASHAMED EP packaging and tour artwork is a symbol of the good news spreading across a world and people of different cultures coming together under the same sun!” shares Reach Creative Director Kevin Hackett. “The eclipse also represents a transition and an awakening that we all felt when we gave our lives to Christ. We want to represent the power and the joy in that awakening and share it with the masses.”

The new We Are UNASHAMED EP is currently available on all digital music streaming platforms. Click this link to stream https://116.lnk.to/WAU 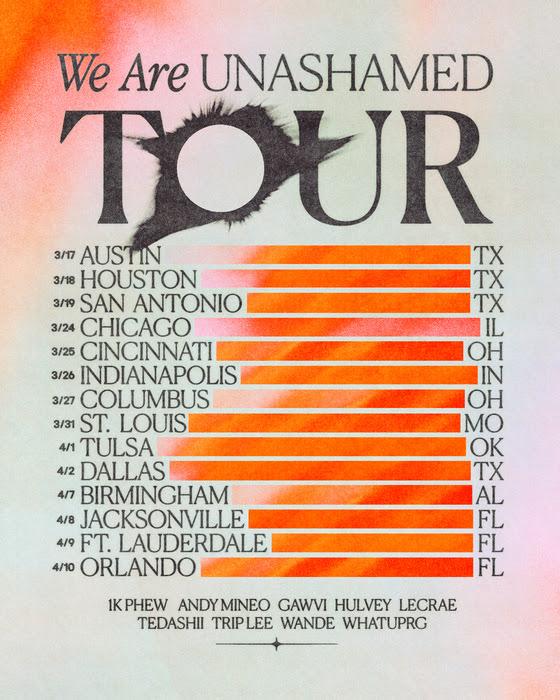